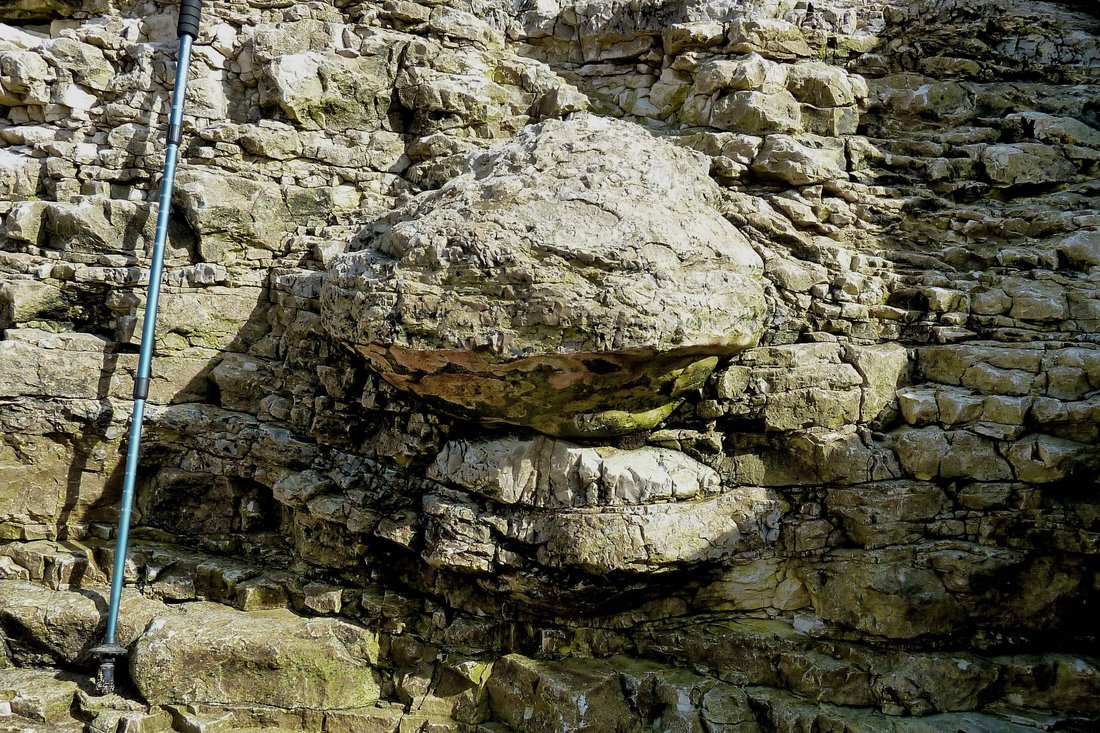 Two stacked Paramoudra typica in the eastern cliff at North Landing Bay, Yorkshire.
The sunshine is coming from due south at midday. Chalk sediment has built up against the south side of the structure and to the north 2 lines of tabular flint are left where the soft 'Protoflint' has been removed by the tide. Notice how smooth the underneath of both structures are as these areas were beneath the sediment and thereby protected. The layering of protoflint (see below....) is obvious on paramoudra in this bay and there is flint surrounding the central stem on cracked open ones on the beach which would indicate it is Pachinion scriptum in this location. As the weight of the structure increased it has sunk into the sediment evidencing a sea floor origin. There are about 20 paramoudra around this bay including a stack of 4 on the western side. 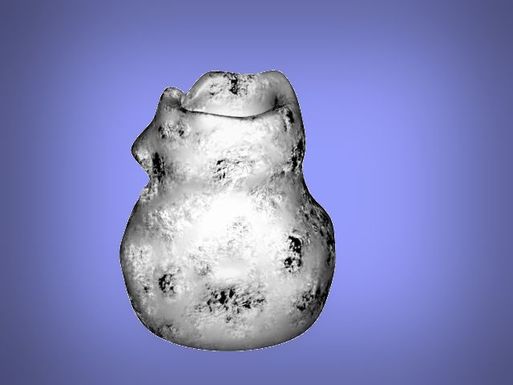 ​Here's one I made earlier, a computer generated image about as typical as a Paramoudra typica gets.
Approximately 0.6m high and 0.45m diameter.
The tops are water sculpted often with an exhalant dip to north east and protuberances either side. The bumps are associated with the reproductive stage,  many have sponge larvae and gemmules within.
Usually hardened chalk fills the central cavity and stem is visible in some but not all. 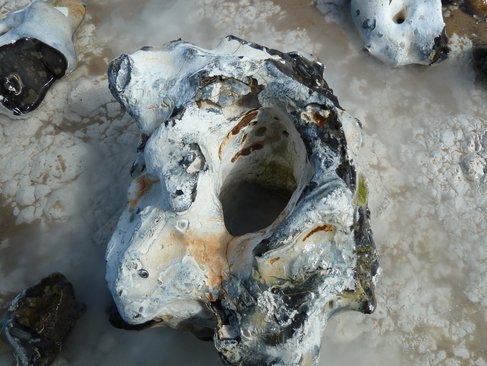 The real thing in situ at West Runton, sun from the south, exhalant dip to north east protuberances either side with a layer of protoflint on the left one.
Rimprint with pyrite sponge fossil to inner wall.
My current thoughts are the outer structure is a barrel sponge as the flint will contain sponge larvae, gametes and gemmules plus a multitude of spicules. The rimprint and pyrite comes from a Calcerea sponge living symbiotically in the shelter of the central cavity.
There is also a small echinoid embedded in the wall as debris was ejected by the occupying sponge.

At over 2m across this circle of flint sits 60/70 metres SW of the reef at West Runton, this is a Paramoudra magna. The outer rings are either single flints upstands or they divide up with young sponge placements producing a double wall. Further towards the reef the flints have been broken by the tide and just the hard chalk mounds remain in a North East line with the big paramoudra that  form the main framework of the reef.
​Ventriculites radiatus sponge fossil has been noted within the central chalk. 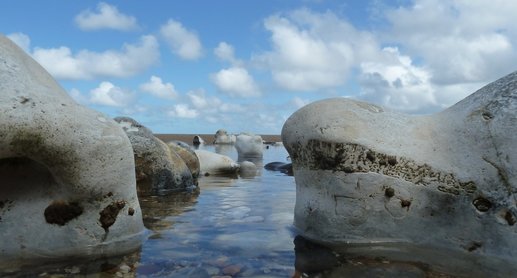 ​ The figure left shows a Paramoudra magna in situ near Sheringham. This 2m circle of flints with Hexactinellid sponge detail and pyrite fossil remains would be visible for a while then become buried by sand for months. The sand cover prevents the pyrite from dissolving but it hides sponge detail from view on a regular basis. ​ 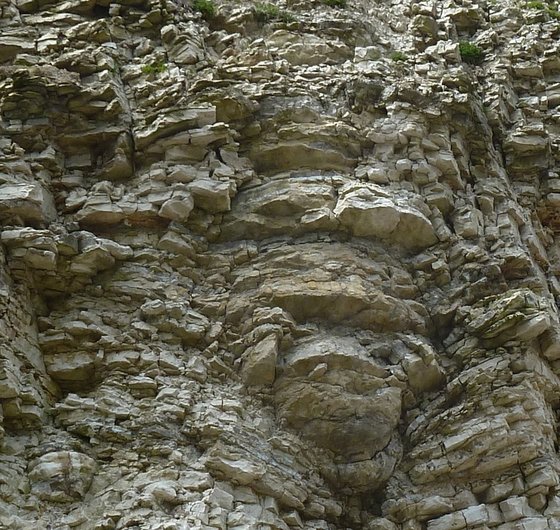 Back to North Landing, Yorkshire.
Near the top of the Western cliff just before the chalk arch are 2 P magna exposed.
They are not too easy to spot but look for the deformed, collasing sediment below.
​The flint rings do not continue from top to bottom, it seems the hardened chalk forms the bulk of the structure and this is what leaves the mounds as seen at West Runton.

Note small paramoudra bottom left of image.
​It would seem the magna grow from small beginnings over an immense period of time. 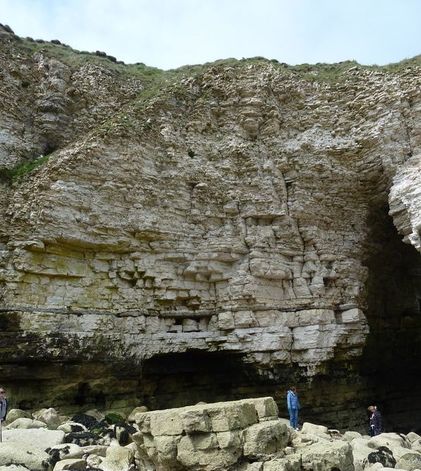 ​To give an idea of scale here is a wide shot of the Western Cliff.
The P magna pictured above is slightly to the left of the person in blue, almost at the very top of the cliff.
The second one is far left, again almost at the top.
​These may well have been in a line along the edge of a reef as seen in Norfolk but the tidal direction had turned more due North at this latitude. 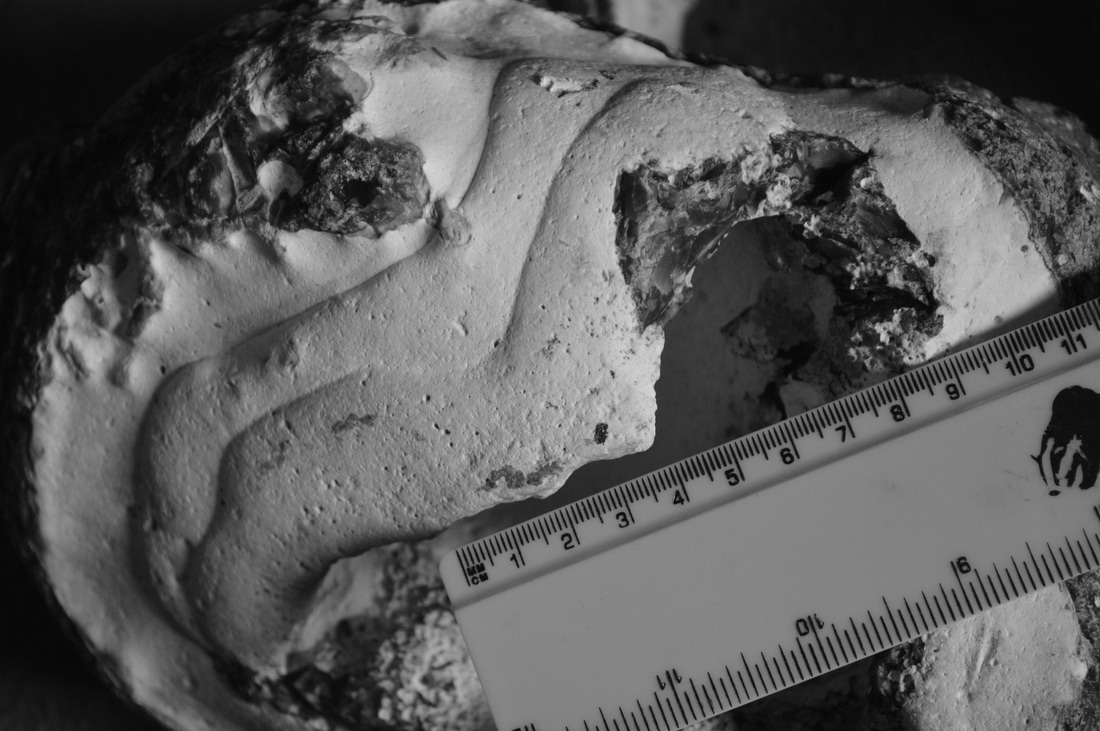