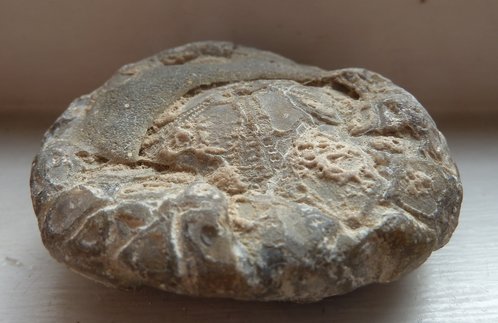 William, a local farmer, showed me a flint he had ploughed up. It had a squeezed bulge of flint protruding from an echinoid.
In my collection of fossils was the one pictured left. It has a similar bulge over the exterior and looks like it had been stepped upon or had imploded.
The surface of the squeezed flint has a fine texture to it and I asked some friends to go through their finds. 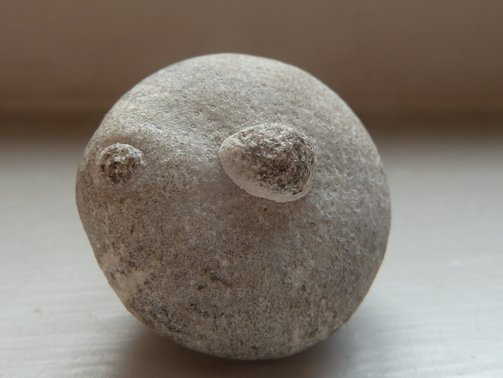 Dan turned up with a good selection saying he mainly only collects perfect specimens and had given away or not picked up a lot with damage or protuberances.
The one on the right had a bulge of flint from both the mouth and the anus of the echinoid.
Again this has the fine textured surface to the flint. 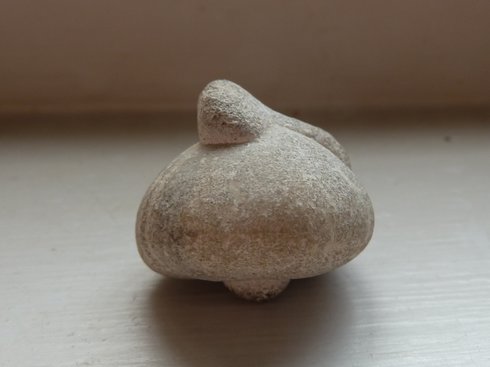 ​On the top (same one as above) the squeeze of flint had been pushed out of the centre and 'ran' down the back.
We realised these echinoids had been invaded by a sponge which then occupied the test.
In the case of the squashed one at the top of this page once the echinoid had been devoured the test could not survive 'under pressure' and it collapsed.
The fine texture of the sponge skin is apparent on this next example.
The bulge has exited from the top of the echinoid and the flint itself contained sponge larvae. It may be the sponge leaves the test to distribute next generation or they just outgrow the cavity. 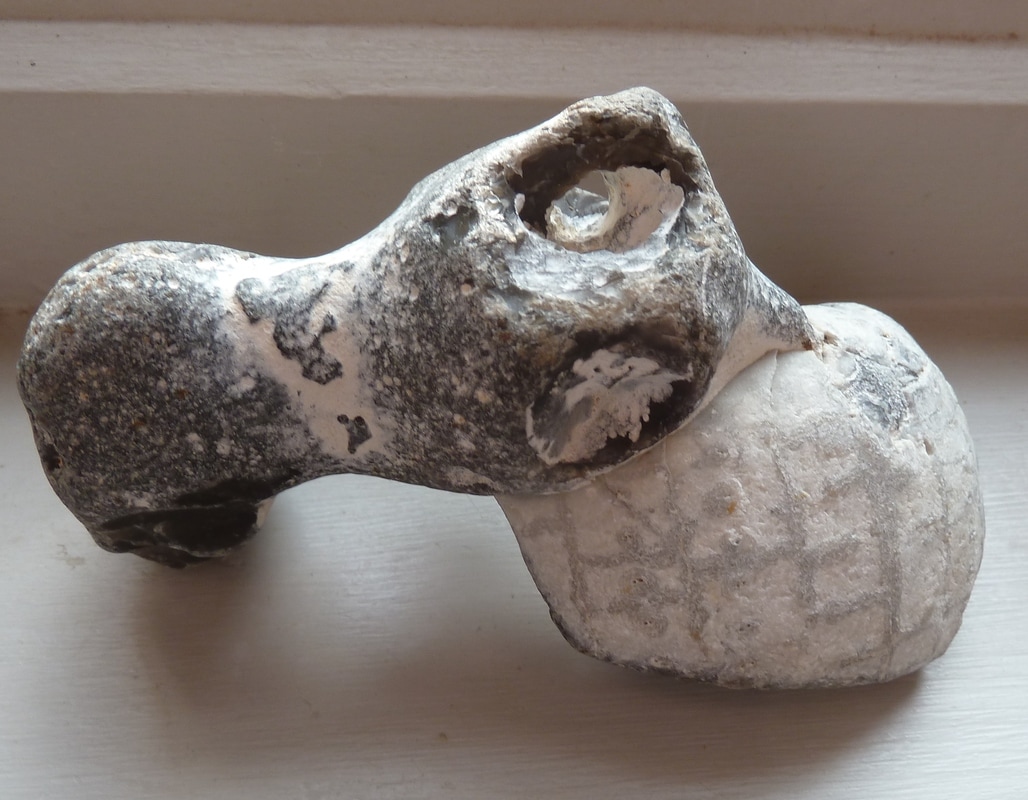 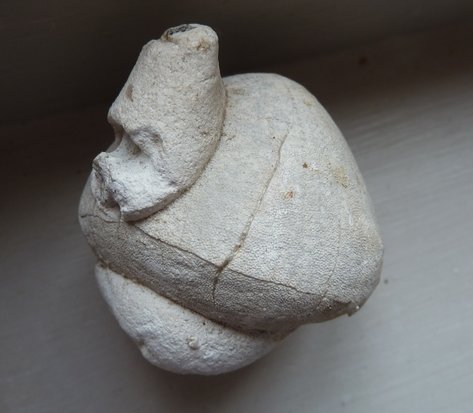 One bulge of flint from the base and the echinoid test itself is cracking as the sponge grows and expands.
The protuberance from the side appears to have been nibbled by a crustacean.
In the safe enclosure of the test, the sponges did not need to deploy a toxin to deter predation. 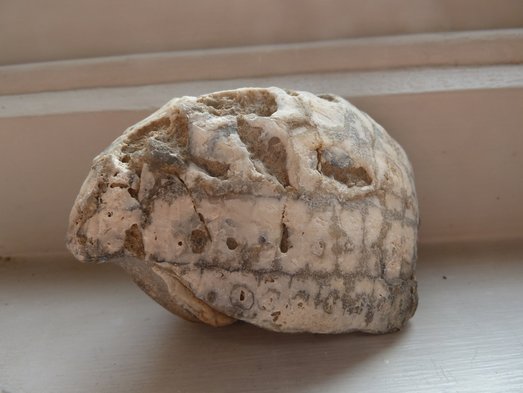 ​This test looked as if the shell had been dissolved by the sponge to gain entry. 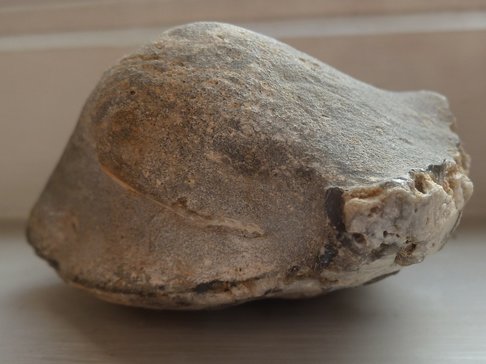 ​On the other side the fine texture of the sponge skin. 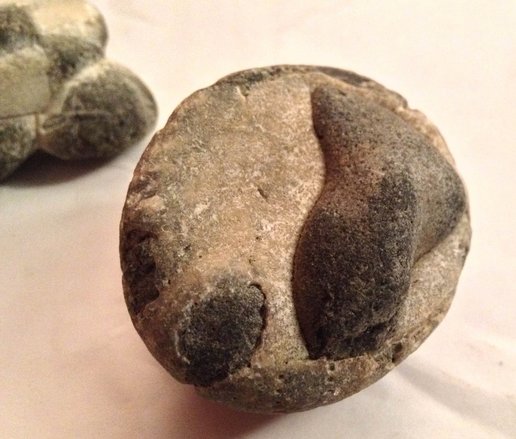 A bulge of flint across the base and the test is full of the fine textured sponge skin which can be seen where the shell has been abraded by the tide.
On several of the examples the sponge has exited the base. It must be imagined that sponges had a method to immobilise and overturn their host as the sponge would not exit into the sediment below. 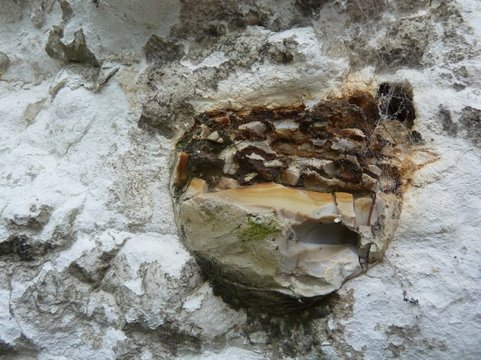 Many in situ echinoids are upside down in the Chalk.
This one is in the Ravendale, west quarry in Lincolnshire.
The lower half is solid but the top half has only the sponges canal system picked out in flint.
Very often on the West Runton wave cut chalk platform an embedded echinoid will sit base up.
An echinoid nest at West Runton, Norfolk.
Nine or more echinoids being engulfed by flint. Where the tests are broken away the inside is full of flint.
Why they are trapped in groups like this is a mystery.
These nests, as they are called locally, are also found at Caistor quarry. 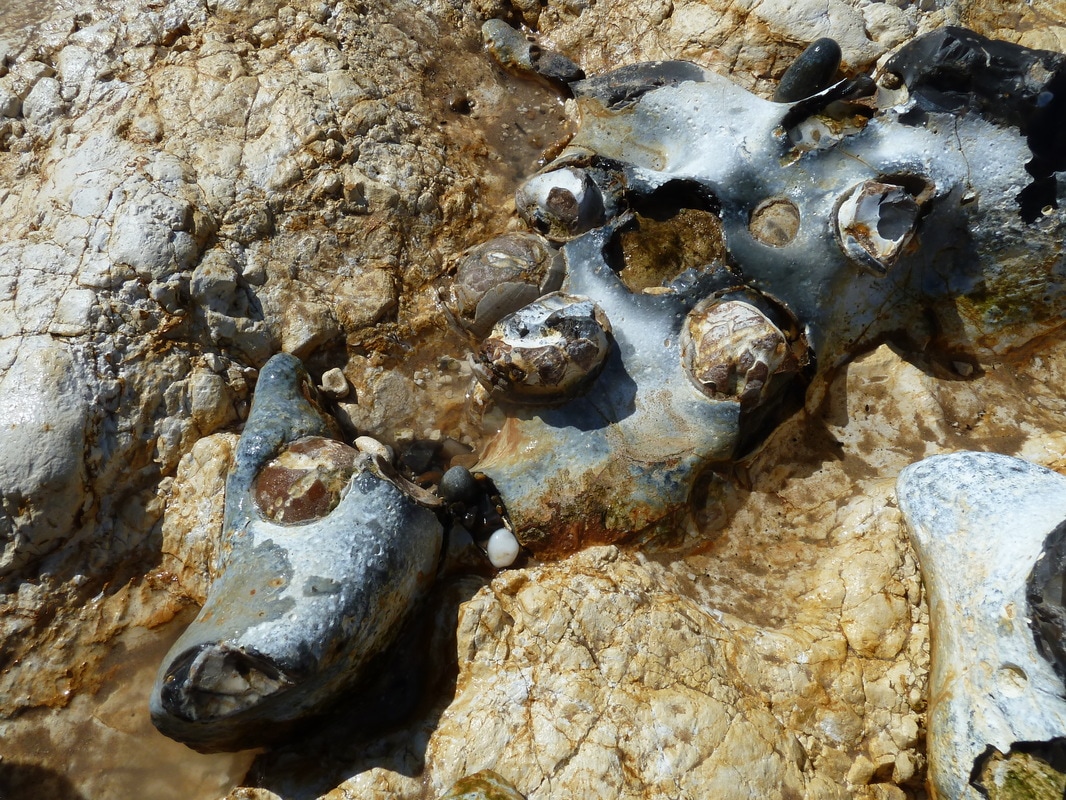