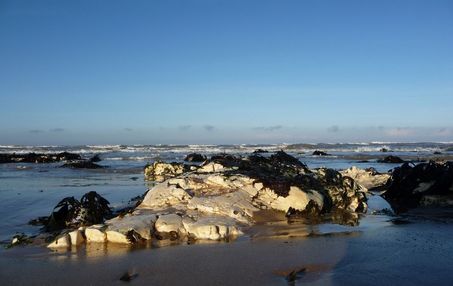 Areas of the wave cut chalk platform at West Runton, North Norfolk, represent the Cretaceous sea floor from 75/78 mya. Today there is a 3 degree E/W strike to this coast so the further west towards Sheringham one travels the older the Chalk becomes with about 4 million years of deposition between the two locations.
As the tides erode the chalk, fresh flints and paramoudra appear along the beach.

​Seven years of research has provided a stock of photographic evidence that sponges were the causative organism of the barrel shaped paramoudra and the majority of flint nodules.​ ​​ 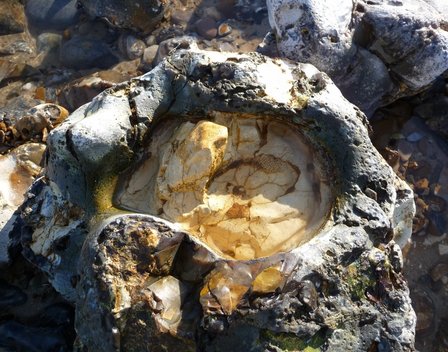 On the chalk at low tides and quite distinctive are large barrel shaped flint masses known as Paramoudra. These vary in size from small, fit in the palm of your hand,  P parva  to 0.5m wide P typica  (left), up to 2 or 3m across P magna as flint rings or at the same size P multa divided into smaller flint circles within a larger flint ring.
Many still have a hard chalk centre some with a central stem or mark and I began to find evidence of sponges in the chalk cores and on the inner rims. The trace fossil on the rims I call 'Rimprints' and over the 7 years of this study I have seen and photographed hundreds! The Paramoudra typica (left) has a well preserved sponge fossil in the chalk core with central mark of the osculum and anastosmosing filaments.

The accepted theory was Paramoudra flints formed away(?) from an organic nucleus deep in the sediment below the Cretaceous sea.
The Paramoudra I was seeing had identifiable, repeating characteristics and the tops were too organic, clearly shaped by flowing water.
​This did not fit the accepted theories of Paramoudra or Flint formation. These were not random shapes. 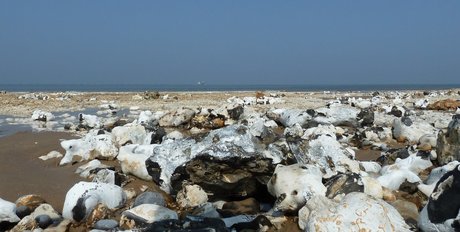 I also began to find similar sponge details on freshly eroding flints. Quite unexpected were the recurring shapes, colours and surface texture of flint nodules. Even more surprising, identifying a Cretaceous sponge reef by the directional trend of Paramoudra. Microscopic study of the interior of flint. All of this evidences a sea floor origin of flint.

Flint is fossilised sponge!
All images and text on this site are copyright Russell Yeomans 2017 unless otherwise stated.
If you want to ask questions or wish to use any pictures or research from this site please contact me at russellparamoudra@gmail.com 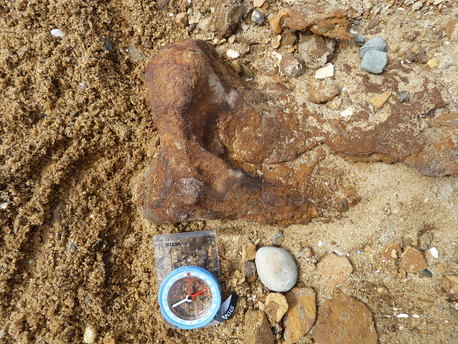 ​Dan and I were on West Runton beach 28/04/2017. We had been looking for more of the flint cores and points that we had been finding over the past month. We headed East towards Cromer and spotted this shape in the sand among several pieces of bone. We began to dig around and soon realised the whole bone was there. The other pieces were breaking up too easily and were very fragile so I began taking photographs to record what was there in case the worst happened. I also switched on the GPS receiver to record an exact location for the find. 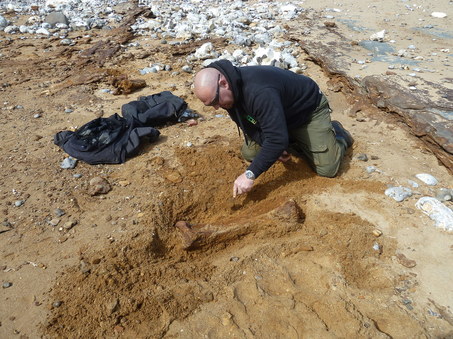 All  care was taken. I don't think either of us expected it to come out whole as we thought it was still attached to a clay or crag base.
The other smaller bones can be seen behind Dan's rucksack. As we worked there was another small bone just lying on the surface where we were. That had been rolled and cleaned by the tide. 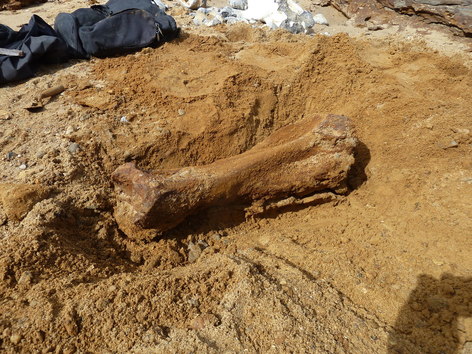 ​All  cleaned off. Dan had acertained it was loose now in the sand. Judging by the pebbles attached to it we think it had been in the crag and 'liberated' by the waves and moved around a bit as it was just embedded in the sand now. Dan lifted it clear and wrapped it in his jacket and we headed back to Seaview cafe to report it to the museum service. It was quite a sight, Dan had it over his shoulder and it looked just like a baby but a big one! The EDP reported turned up to photograph and it is front page news today. 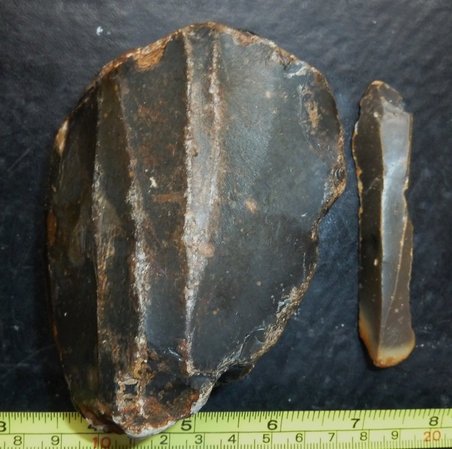 ​This is what had been found a fortnight earlier. A flint core worked from both ends. Lovely patina. We think the erosion of the cliffs and Cromer Fresh Water Bed has reached a position on the ancient river side where a party of stone age people were hunting and making weapons to do so.
Majority of flint finds are axe heads and arrow points but the cores are easily over looked. It was lucky this one was right way up or it would not have been ID'd. This has been logged with local museum and Historic Environment Records. 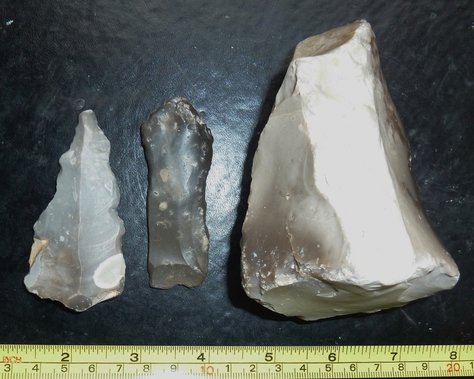 And then we found some more!

We had found another 2/3 small worked flints yesterday and had moved down the beach when we were somewhat distracted by the 'mammoth'(?) bone.

There is plenty to see and find at West Runton.
Proudly powered by Weebly